The last week has seen three major events in DC that have each attracted hundreds of thousands of people: Trump’s inauguration, the Women’s March on DC, and yesterday’s March for Life. Trump’s inauguration had the majesty of the peaceful transfer of power. The Women’s March was billed as a massive display of resistance to Trump. Anyone want to guess if the March for Life was treated as positively?

When using liberal talking points, such as calling last week’s Women’s March a “resistance” movement, many in the media fall back on the excuse that they simply describe an event according to the language used by the event’s participants. Yet when the annual March for Life comes around, complete with thousands of signs proclaiming a “pro-life” agenda, the towering heights of the media still referred to them as “anti-abortion.” This is because much of the mainstream media considers the liberal position to be correct, so everything is viewed in relation to how it affects liberal policies.

And considering how interested everyone was in crowd sizes for the last week, there has been curiously little discussion of the massive numbers who attend the March for Life, not just in 2017, but Every. Single. Year. There are no definitive estimates, but it is generally agreed that hundreds of thousands of Americans from all across the country make their way to DC for the March for Life, and they do it repeatedly, rain or shine. Last year, the March for Life went on as planned in the early stages of a massive blizzard that would shut down the mid-Atlantic region for days.

Last week’s Women’s March garnered wall to wall coverage on cable news. While that march likely had more attendees than yesterday’s March for Life, but fewer than previous gatherings (2013’s March for Life brought together an estimated 650,000 people), the media attention was disproportionate. The streets of DC were once again flooded with people passionate about a cause, but the media interest was not the same.

Of course, this bias against the pro-life movement is not unique to the March for Life. A few days ago, The Atlantic ran an article criticizing ultrasounds because the technology gives expectant mothers the ability to see the heartbeat of the child inside her, which apparently is bad for some reason. And because liberals seem to have forgotten the awesome power of irony, the article, which claimed ultrasounds are misleading and wrongly give an appearance of scientific support to the pro-life movement, had to undergo several corrections after The Atlantic realized many of the “scientific” claims it made were incorrect.

The first line of the article is now “Editor’s note: This article has been significantly revised since original publication. Please see correction note below.” The following is a partial list of those corrections: 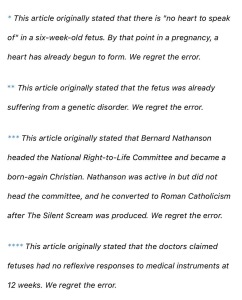 The Atlantic eventually admitted the primary argument of its article was false, but how many people saw the article before the corrections and left with incorrect perceptions? More than that, how did easily verifiable information that is crucial to the argument go unchecked before publication?

Much of the media is biased against the pro-life movement. I see no other logical explanation for these and many other occurrences. Yet we soldier on despite this opposition. It is a long, tough, but vital battle. And while it may get discouraging with so many of the most influential Americans lined up against us, as Vice President Mike Pence said at yesterday’s rally, “life is winning in America.”